Poste Italiane's remuneration and incentive policies are based on the Company's governance model and on the regulatory framework in effect from time to time, and they comply with the recommendations of the Corporate Governance Code which the Company adopted.

Poste Italiane's remuneration policy sets the framework for the Group's remuneration practices and policies, and enshrines the objectives of sound risk management, long-term value creation and sustainability, as well as alignment with the "2024 Sustain & Innovate" Strategic Plan. Remuneration policies are also inspired by the principle of inclusion and meritocracy, guaranteeing fairness, attraction and retention of the best talents to support the innovation journey and regardless of gender, as well as any other form of diversity (age, sexual orientation and identity, disability, state of health, ethnic origin, nationality, language, political opinions, socio-economic condition, religious faith).

To support the pursuit of the Company's long-term interests and sustainability, and to guarantee the execution of the "2024 Sustain & Innovate" Strategic Plan, the "Reward Platform" was defined, capable of integrating Human Capital Development and Environmental, Social & Governance (ESG) strategies into the business priorities.

The remuneration policies support the pursuit of the business objectives, and the key performance indicators are set at challenging levels whereby their achievement ensures self-financing of all incentive schemes (threshold values of the indicators defined at least equal to the budget and Strategic Plan levels). EBIT, key objective of the incentive scheme, is the summary indicator of the results common to all Group businesses and is measured annually and multi-annually.

Alignment with shareholder interests is also ensured by the presence - in the variable component of remuneration - of targets related to the ESG performance and relative Total Shareholder Return.

In fact, the incentive systems are marked by specific ESG indicators, which weight at least 40% with reference to the short-term incentive scheme "MBO". As confirmation of the strategic commitment made by the Group in terms of sustainability, the "2021-2023 Performance Share LTIP" includes an ESG target weighted 20% linked to the Group's Sustainable Finance and consistent with the KPIs of the "2024 Sustain & Innovate" Strategic Plan presented at the Capital Markets Day on 19 March 2021. All targets are predefined and measurable with the highest transparency within the framework of a robust corporate governance system.

CHAIRPERSON OF THE BOARD OF DIRECTORS

The remuneration of the Chairwoman of the Board of Directors consists of a fixed component, by way of remuneration, approved by the General Meeting of shareholders of 15 May 2020, for the 2020-2022 term, in accordance with art. 2389, paragraph 1 of the Italian Civil Code and equal to €60,000 per annum, unchanged compared to the one defined for the previous term of office.

From 2021, subject to the approval of the General Meeting of shareholders of 28 May 2021, the maximum ratio of variable to fixed remuneration is 2:1.

It is recalled that, also with reference to the CEO-GM, as part of prudent risk management, in compliance with the Group's Risk Appetite Framework, the increase of the incidence of the variable/fixed ratio to the limit of 2:1:
The gross annual fixed remuneration, with reference to the 2020-2022 term, has not changed compared to the previous term of office and is therefore confirmed at €1,255,000, while the value of the overall incentive schemes (both short and medium-long term) cannot be more than twice the same fixed amount (maximum incidence 2:1 between variable and fixed remuneration).

In light of these elements, the following chart shows the CEO-GM Pay Mix for 2021, assuming over-achievement of results. It also illustrates the mix between the short-term and medium/long-term variable component, a specific focus on the timing of variable remuneration and a breakdown between the monetary and equity components: 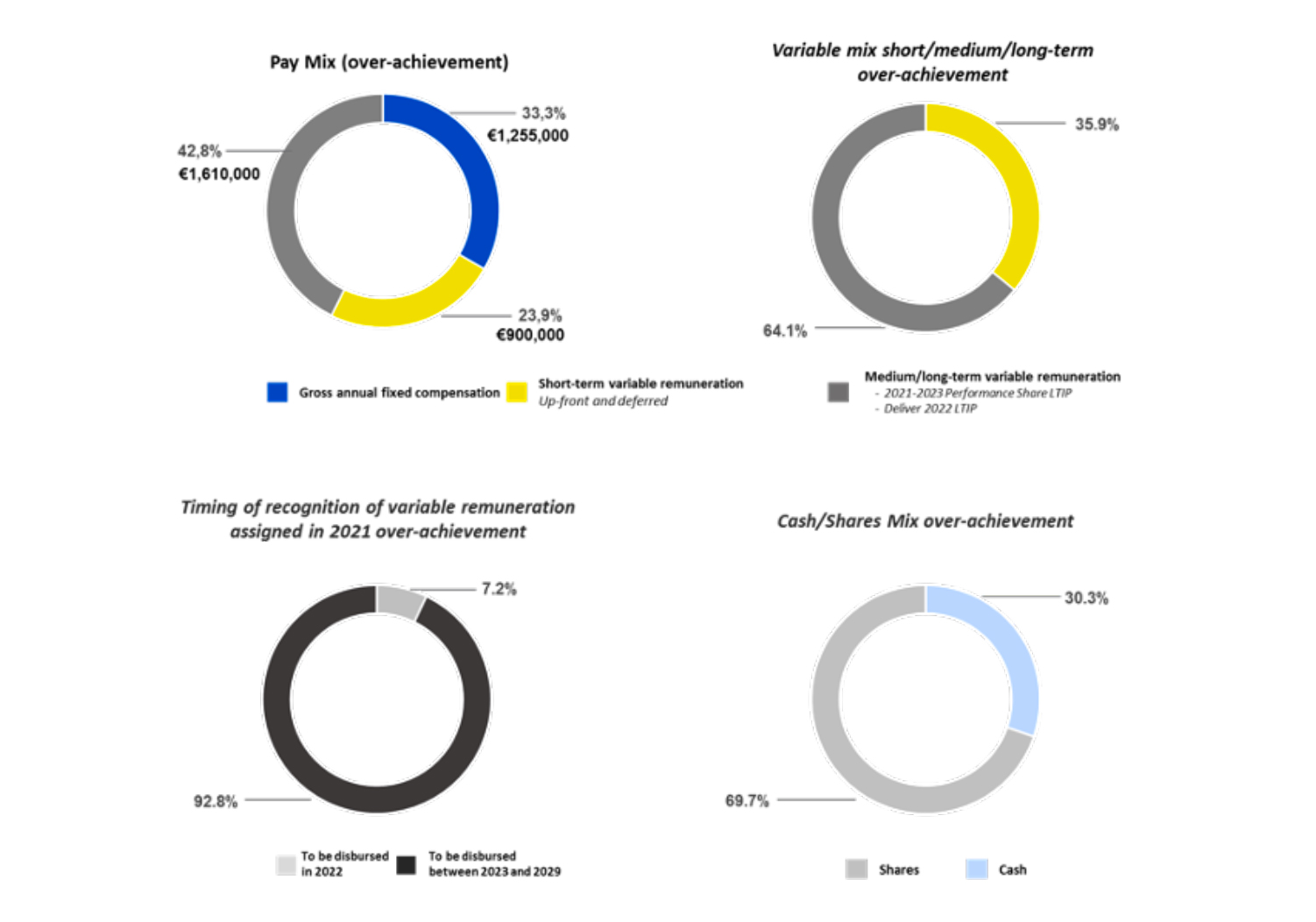 This Pay Mix has been calculated on the basis of awards under the short and medium/long-term incentive schemes thus, in the event of over-achievement, considering the entire value of the "2021-2023 Performance Share LTIP" and the annualised value of the "Deliver 2022 LTIP".

The mix between the short-term and medium/long-term variable component, assuming over-achievement of results, foresees prevalence of the latter over the short-term.

With respect to the timing of recognition of variable remuneration awarded in 2021, less than 10% may be paid in 2022 in the case of over-achievement performance, while more than 90% may be paid between 2023 and 2029.

Also with reference to the over-achievement variable remuneration, as shown in the last chart, more than 2/3 may be paid in the form of shares.


VARIABLE REMUNERATION PAY-OUT FOR THE CEO-GM 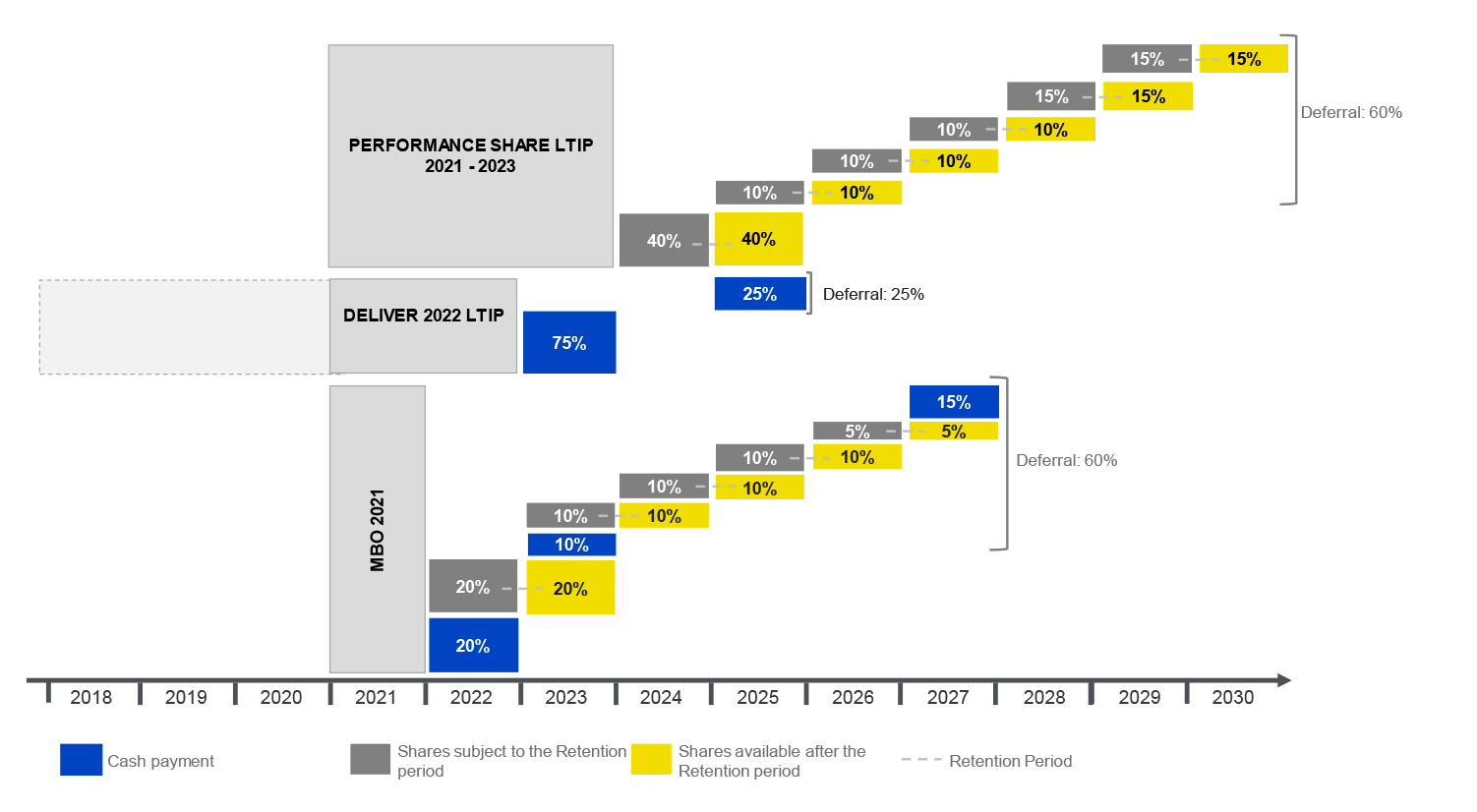 The structure of the payout over time involves the award of variable remuneration over a total period through to 2030, including performance, deferral and retention periods. Given the performance achieved, less than 10% of variable remuneration for 2021 will be effectively paid out in 2022, following approval of the financial statements for 2021, whilst the remaining portion is spread out over time.

Application of Malus and/or Clawback mechanisms is envisaged for all of the up-front and deferred portions.

CONDITIONS AND PERFORMANCE TARGETS OF VARIABLE REMUNERATION FOR THE CEO-GM 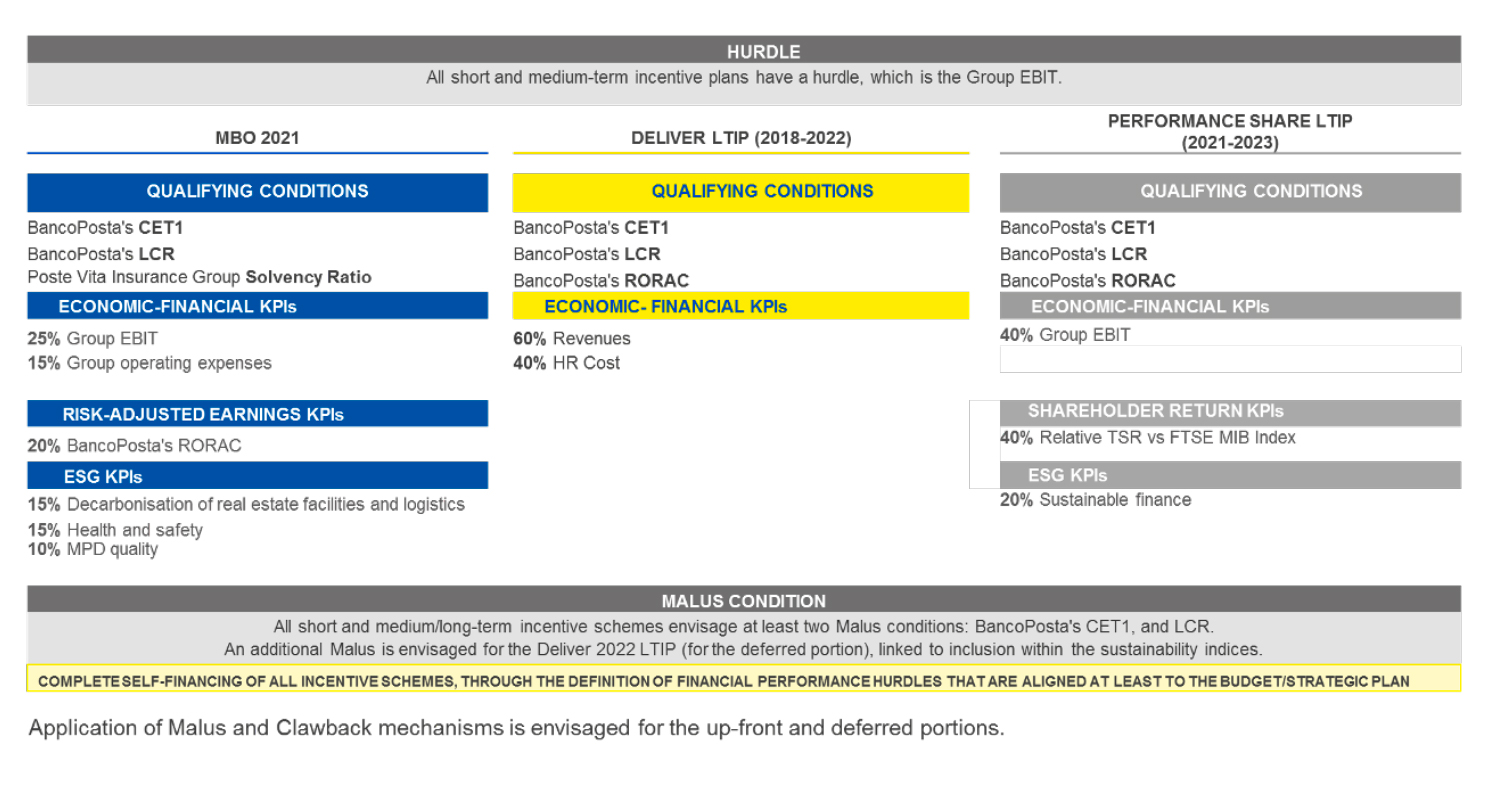 The General Meeting of shareholders held on 15 May 2020, with regard to the term of office 2020-2022, determined the remuneration payable pursuant to art. 2389, paragraph 1 of the Italian Civil Code as €40,000 per annum (confirming the values defined for the previous term of office).

The additional remuneration for members of Board Committees, approved by the Board of Directors, in consultation with the Board of Statutory Auditors and the Remuneration Committee, was defined on 10 June 2020 and is indicated below.


REMUNERATION FOR PARTICIPATION IN BOARD COMMITTEES

BOARD OF STATUTORY AUDITORS

The Statutory Auditors' remuneration is in no way linked to Poste Italiane's performance. The fees paid to Statutory Auditors consist solely of a fixed component, determined on the basis of the commitment required in order to carry out their duties.

The General Meeting of shareholders held on 28 May 2019 appointed the Board of Statutory Auditors for the term of three years, with expiry as at the date of the meeting to be held to approve the financial statements for the year ended 31 December 2021. In the same meeting, the fees payable to the Chairperson and each standing Auditor of the Board were determined for each year in office, respectively equal to €80,000 and €70,000.

No attendance fees are payable for participation in meetings.

The term Key Management Personnel, within the context of the Company, refers to the heads of the various functions reporting directly to the CEO-GM, as well as the Manager Responsible for Financial Reporting.

KMP with particular responsibilities benefit from remuneration policies in line with the related statutory requirements and the provisions of the Group's Corporate Governance processes.

The following chart shows a summary of the incentive schemes applicable to KMP, highlighting the payment criteria defined in accordance with the sector regulations if identified as among BancoPosta's Material Risk Takers ("MRTs")1.

ILLUSTRATION OF PAY-OUT IN FORM OF VARIABLE REMUNERATION FOR KMP 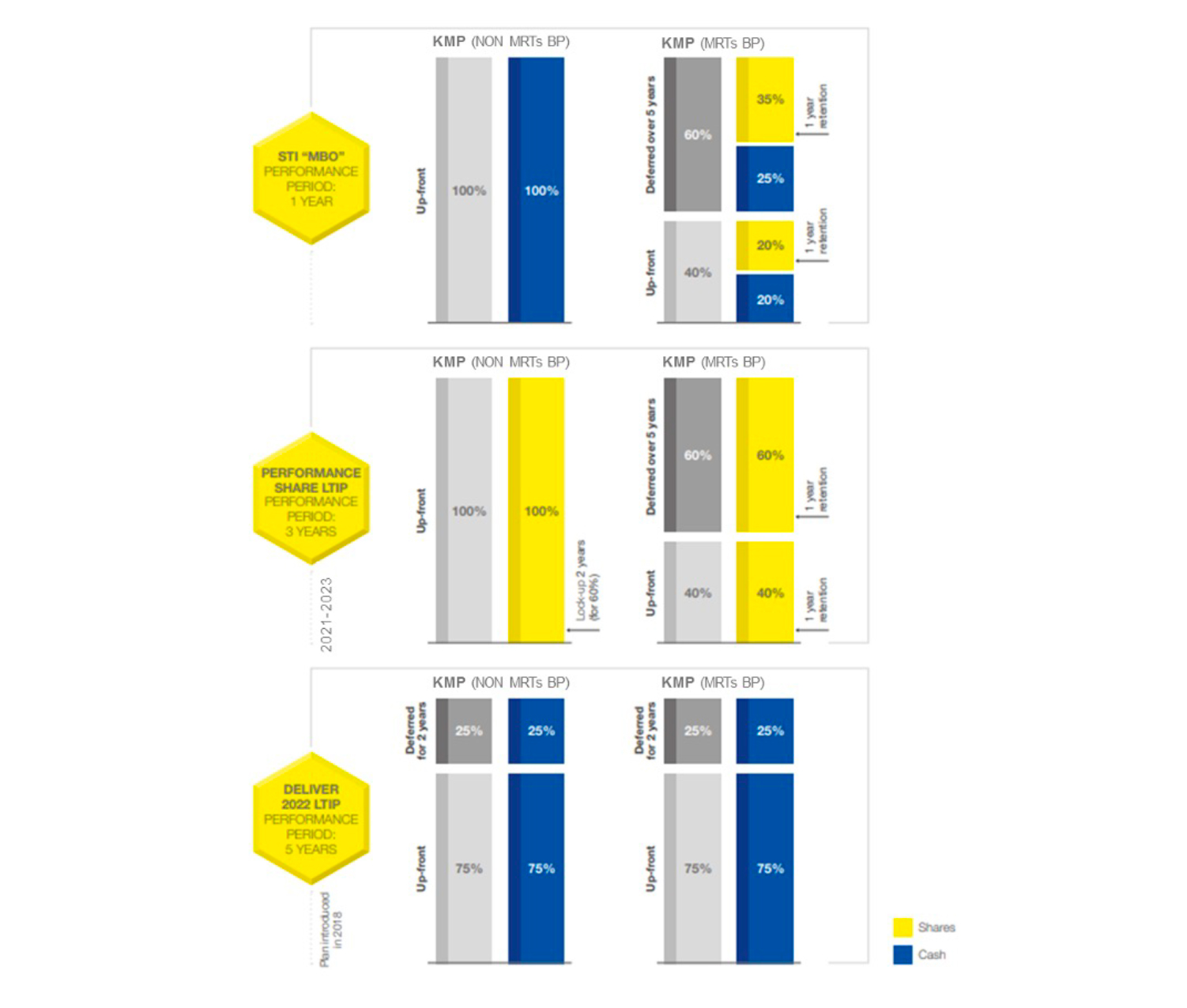 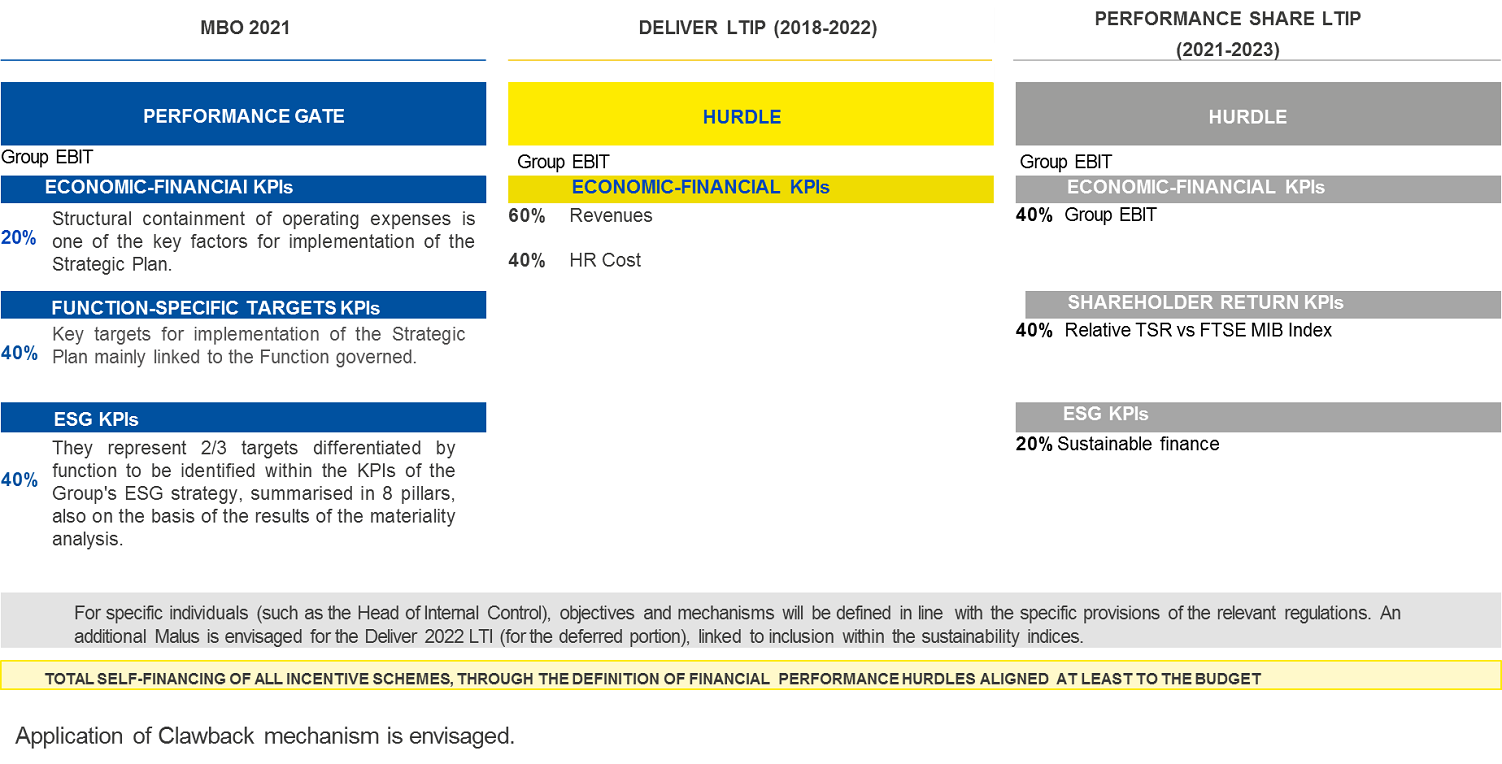 Tables – CONSOB Form 7-bis1
TABLE 1: REMUNERATION PAID TO MEMBERS OF THE BOARD OF DIRECTORS AND BOARD OF STATUTORY AUDITORS, GENERAL MANAGERS AND OTHER KEY MANAGEMENT PERSONNEL 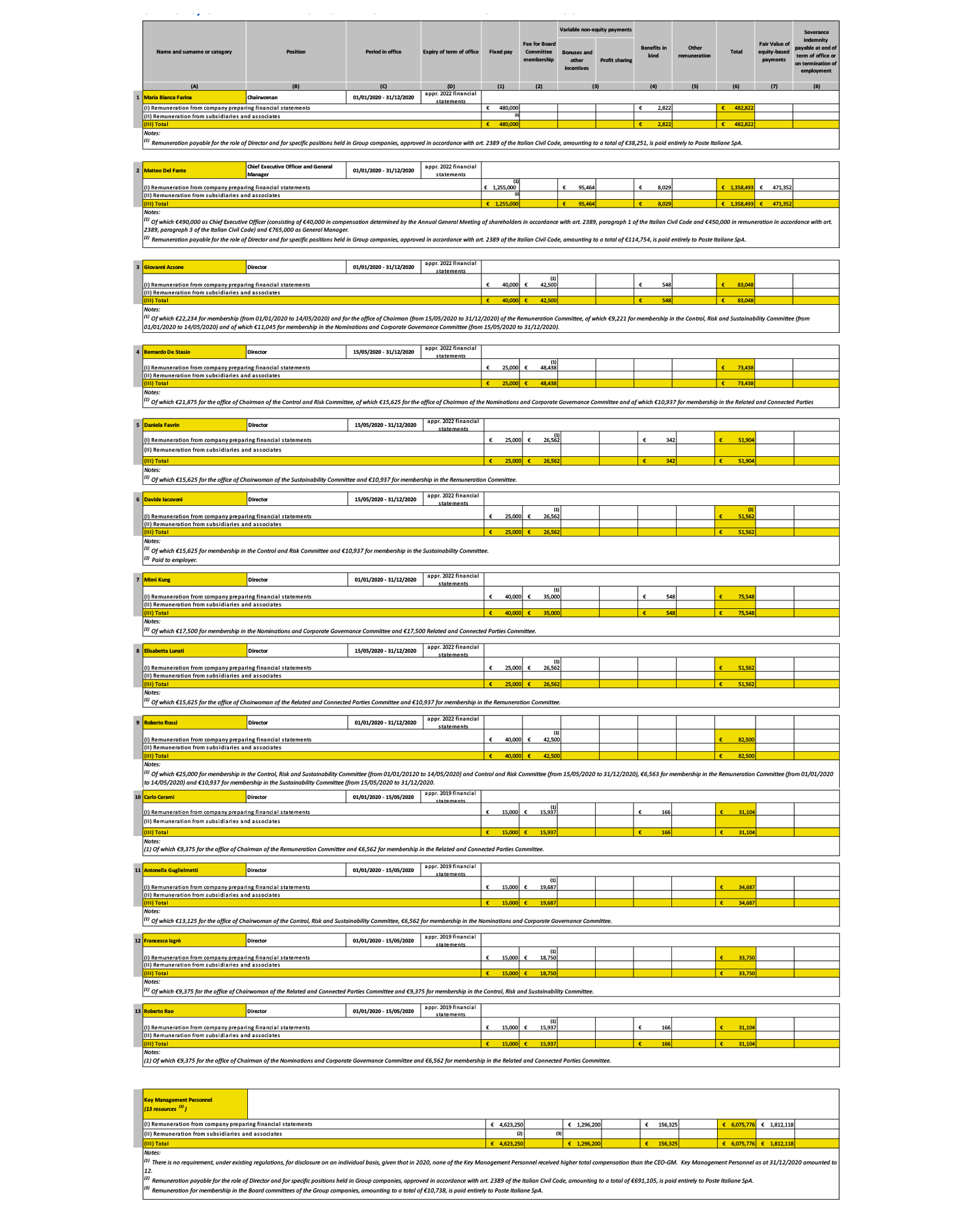 1 The amounts included in the tables are computed on an accruals basis in respect of fixed remuneration and the short-term incentive scheme ("MBO"). The variable pay shown in the tables is based on an estimate of the amount payable at the time of preparing this document, whilst awaiting approval of the Company's financial statements by the General Meeting of shareholders.