Poste Italiane is aware of the risks that climate change may pose to its business activities and therefore believes it is important to identify the potential economic impacts of climate-related changes. The extensive presence on the territory and the impact of its activities require the Company to adopt a responsible approach to reduce its environmental footprint and contribute to the low-carbon transition of the economy and the whole country. In fact, in line with the objectives of the Paris Agreement and the New Green Deal, Poste Italiane is committed to reducing its emissions by 30% by 2025 and achieving carbon neutralityby 2030, well in advance the European Union timeframe. The Company's objective is also to spread a culture of environmental protection and to encourage conscious behavior in the use of energy, water resources and waste management. The attention given to environmental issues is shared with all stakeholders of Poste Italiane through the Group policy on Environmental Sustainability. Specifically, the Group's commitment is implemented within the decarbonization of buildings and logistics, realizing a series of initiatives aimed at reducing the potential negative impact on the environment.

The True Value of the Fleet Renewal Plan

Aware of the "ecological footprint" generated by a delivery service that covers extensively the entire country, in 2019 the Group wanted to implement a Renewal Plan that provides for the replacement, by 2022, of the entire vehicle fleet.
The new vehicles will guarantee:
In order to measure the value generated by the introduction of the new vehicles in the fleet, Poste Italiane has adopted an investment assessment methodology that combines the traditional financial perspective with the perspective of sustainability, with a view to an integrated strategic planning that allows to create value shared between the Company and the territory.
The figure below represents the results of the analysis in the form of the "True Value bridge", i.e. the graphical representation of the net impacts of the green fleet compared to a traditional fleet. Positive values represent avoided costs, while negative values represent additional costs generated by the green fleet compared to the as-is fleet. 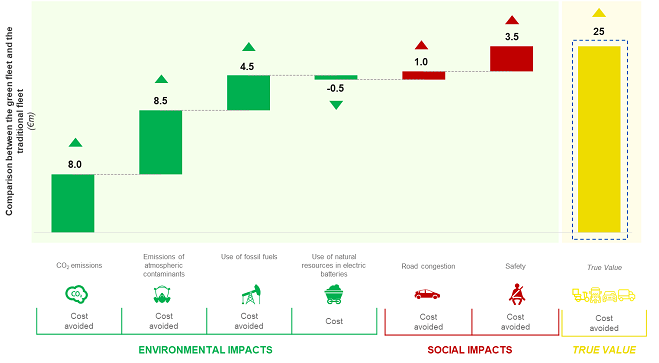 According to the model calculated, the new green fleet will generate value for the community (True Value) equal to
+ €25 mln compared to the traditional fleet, during its total period of operation.
In particular:

Poste Italiane adheres to the international initiatives towards a green transition:

Exiting the pandemic with a new Green Deal for Italy

The Group is a signatory to the Manifesto "Exit the pandemic with a new Green Deal for Italy", promoted by the Sustainable Development Foundation, which aims to relaunch the country's economy towards a green path. The Company believes that this project is the way forward for a stronger and longer-lasting recovery that enhances activities aimed at decarbonisation and circularity of production, distribution and consumption models.

Poste Italiane participated in the second edition of the "Green Postal Day", an initiative organized by the International Post Corporation to enhance the contribution of postal operators to the reduction of CO2 emissions and the global fight against climate change, which has assumed greater relevance in a context of global pandemic.


European Alliance for a Green Recovery: Poste Italiane in the field to build green investment plans

The Group, in line with its environmental sustainability strategy, through its subsidiaries Poste Vita and BancoPosta Fondi SGR, has joined the initiative promoted by the PRI, joining the appeal made by member states, entrepreneurs, researchers and non-governmental organizations of the European Union in support of a Green Recovery Plan to promote the construction of green investment plans together with more than 50 business leaders in the financial and insurance sector and investment funds from 10 European countries.

Poste Italiane Group, through its subsidiaries Poste Vita and BancoPosta Fondi SGR, has joined Climate Action 100+, an unprecedented international collaborative engagement initiative to raise awareness on climate change issues among the world's largest emitters of greenhouse gases. The initiative focuses on the issues of climate risk and biodiversity loss for businesses and aims to mitigate the effects of climate change caused by key economic sectors.

The risk management model adopted by the Group considers both the possible impacts that phenomena related to climate change (e.g. extreme climate events, temperature increases, rising sea levels, etc.) may have on Poste Italiane's business (indirect impact), and those that Poste Italiane's activities may have on climate (direct impact). The process of identifying and assessing risks and environmental management methods also extends to counterparties (suppliers, business partners, other companies), impacting procurement processes and any extraordinary financial transactions, providing, among other things, for the identification of suppliers and partners that may present risks related to environmental protection, including through a multidimensional analysis that takes into account parameters such as

The correct identification and assessment of climate-related risks and opportunities is also ensured by listening to stakeholders. Stakeholders are periodically involved in the Multistakeholder Forums organized by Poste Italiane and have at their disposal a reporting system that allows them to bring any perceived risks to the attention of the Company.

Given the pervasiveness of emerging risks, Poste Italiane considered it necessary to incorporate and manage them within its risk management processes. Emerging risks considered are exogenous, disruptive events that can threaten the business model over a long-term horizon (10-20 years) and are potential game changers for the industry and the context in which organisations operate and are usually characterised by elements, such as: 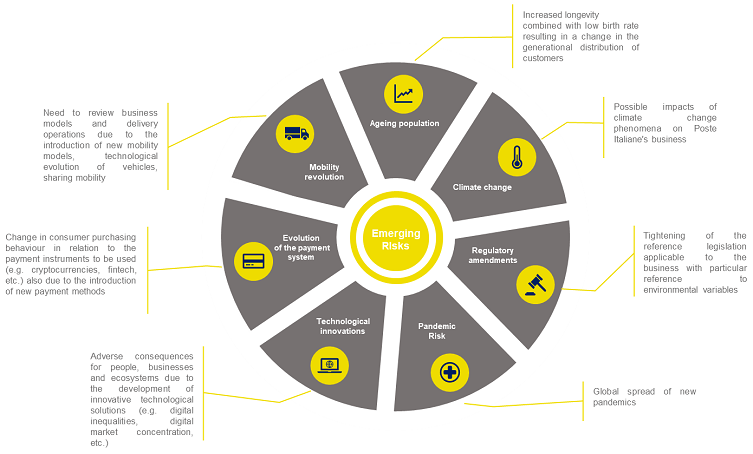 Established in 2015 by the Financial Stability Board (FSB), the Task Force on Climate-related Financial Disclosures (TCFD) defined a set of recommendations with the goal of guiding companies in reporting information in a transparent and comprehensive manner on the risks and opportunities that climate change may pose to business performance. In line with key regulatory trends and in response to growing demands from the financial community and key stakeholders. 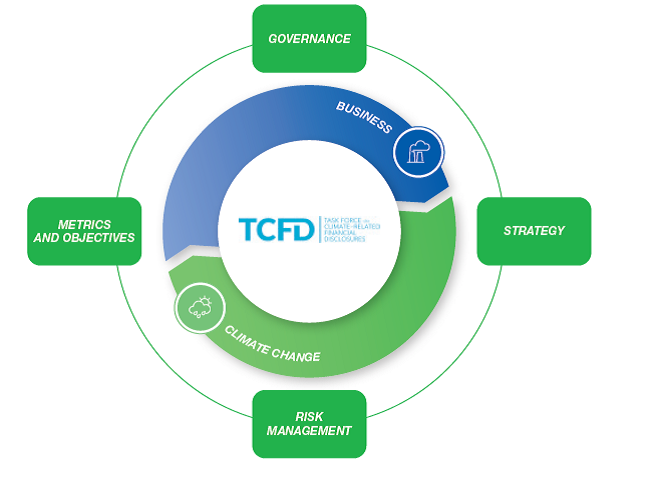 Poste Italiane identifies and analyzes the risks related to climate change taking into account different drivers - attributable to two macro-environments (transition risks and physical risks) – reported below. Against these identified risks and associated with each driver, Poste Italiane, in addition to defining the related opportunities, provides specific mitigation actions. In fact, in the coming decades, a rise in average temperatures of 3 degrees Celsius compared to the pre-industrial era could trigger disastrous chain effects. The fight against climate change, therefore, is not an option but a must. Thus, it is necessary to consider these aspects in the definition of strategies and operational activities of companies.

Taking as reference the International Energy Agency (IEA) and Intergovernmental Panel on Climate Change (IPCC) organizations and comparing the various scenarios proposed, the Group decided to adopt the IEA 2DS scenario (2°C Scenario) as it was found to be the most suitable for the business. In addition to considering the basic assumptions of the model, the trends in the transport sector and estimated forecasts and development over the next few years were taken into account. Afterwards, the Group carried out business projections identifying the related risks and opportunities. Following the analysis, the transition risks identified by Poste Italiane are as follows: emerging regulation, market evolution, technological developments and reputation. It should be noted that the analysis comprehends logistics operations, including transportation, buildings and facilities, which represent key assets for the Company's business.


Poste Italiane's governance dedicated to risk and sustainability, has recently updated its climate change and water risk assessment methodology to better understand potential risks as well as opportunities over different time horizons (short, medium and long term). The purpose of the assessment includes all the Group's production and sorting sites located in different areas of Italy. Following a comprehensive screening process, the IPCC's 'RCP 8.5' (follows a business as usual pathway) scenario were selected as the relevant climate scenario to assess the physical risks and opportunities for Poste Italiane. A risk assessment was undertaken, in order to assess the potential impacts of physical events linked to the climate change evolution on Group business, which considered the extent of the existing risk at the sites and the future risk up to the year 2022 (medium term scenario). In addition to the underlying assumptions of the selected model, the data relating to the main precipitation and temperature parameters of the scenario were studied and compared with current data in order to determine the importance of the variation with respect to the risk existing in the sites examined.

The output is then translated into potential business interruption days and then multiplied by the value in terms of lost revenue (euros) of a business interruption day. Extreme weather events and changes in precipitation patterns are therefore the risk that emerged from the scenario analysis. The greater severity of extreme weather events such as rain, storms, snowfall and possible floods or freezing could cause interruptions in production, sorting and therefore logistical activities, damage to the sites and higher logistic costs. Such acute physical damage and disruption to energy distribution would result in a negative impact on the company's financial performance, and therefore on results and cash flows, as well as an injury to reputation and a consequent loss of customer confidence. One example is the floods that occurred in Genoa in 2011, 2014 and 2016, following which the Group cooperated with national and local institutions. The floods were caused by a lot of rain that exceeded peaks of more than 500 mm in a few hours, in different areas of Genoa and its province, resulting in flooding or torrents in flood. The violent storm that led to the overflowing of the rivers, generated then a large wave of water mixed with mud and debris that swept away half the city causing deaths and injuries and damage to infrastructure. Among these, also Poste Italiane’s Post Offices were damaged, with consequent suspension of services.

As mentioned above, Poste Italiane carried out an analysis based on its production and sorting plants located in various parts of Italy, in consideration of a possible interruption of activities. In this way, the Group was able to assess the potential financial impact of climate-related events with respect to 2022. According to these assessments, the sites with the greatest potential financial impact due to the floods in 2022 are located in the regions of Northern Italy. In particular, the new Bologna’s hub has been identified as one of the sites at greater risk and which would result in greater losses in revenues, in the event of business interruption, due to its operational significance. In response to physical risks, the Group plans specific mitigation measures, which are described in the table below.